Green and gold and red all over: Community outraged at defaced Uga statue 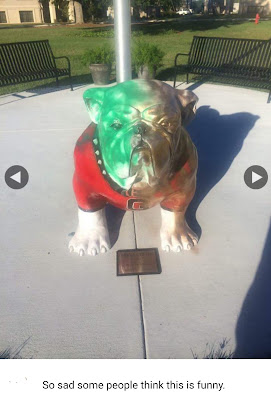 Uga idols have perched on various corners of Tifton. The sponsored dawgs each have their own name and outfit. Tragedy struck recently as one Uga was spray painted green and gold.

The statue was located near two different college campuses, presumably inciting enough pride and rage in someone to deface it.

Photos of it were plastered online causing public shaming and finger wagging. The anonymous artists made their mark and started a conversation. (Alexa, what is anonymous local viral fame?)

I saw my former professors and classmates share the image and express disappointment—outraged at the immaturity. Comment after comment giving the top bullet points on how disrespectful it was.

1.) Could you blame them? Let’s say this wasn’t a prank soaked in alcohol. (Let’s collectively ignore the smell of warm Bud Light wafting through the air.) How long has ABAC been an institution in Tifton? Think about the amount of effort made from the beginning, a 110 years and counting (that’s 10 years before UGA Tifton campus popped up in town), to make a small college last, grow and be respected by the community, region and state.

A college that wasn't necessarily intended to become a four-year school. But more of an effort to train and educate rural communities. It was just one of a heap of Agricultural and Mechanical schools invested in by the state and administered by, wait for it, the Georgia State College of Agriculture at the University of Georgia (UGA). Over time it formed it's own identity and kept expanding and modernizing its agricultural programming as well as it's nursing, humanities, business, math, history, art and science programming~

Where are the fiberglass Thunders, the majestic stallions, decorated and charging the streets? Doesn’t UGA get enough time, attention, money? Really, where is the “gee haw woah back” pride in our community? Everybody wants to take a selfie with a plastic bulldawg, but no one knows what my degree means!

This paragraph is 50% a joke. I don’t even know in what scenario someone says “gee haw woah back” besides at the truck and tractor pull (which I love). It is a little odd, though, how it seems the Stallion brigade is accepted but not celebrated. Like everyone’s weird cousin.

2.) I saw the spray painted dawg, chuckled, read the comments and totally misunderstood the outrage. I thought people were mad about someone destroying public art. (??? @ myself) I shifted between, “Is a fiberglass icon public art?” to “Isn’t a part of the experience of public art how people interact with it?”

2-A) Is a statue of a football mascot public art? I used to watch a television show that would examine great works of art by asking the average person, is this art? They would ask an art critic the same question, a passionate appeal would be made for the artist in question – sometimes. Does art have to be made by a person? The statue was probably made with a mold. It may have been hand painted. Someone had to design it. Someone had to name it!

If it is art, is it good art or bad art? We can all agree that that assessment doesn’t really matter. But it is curious to try and reason it. Here’s what I’ve landed on: no, it’s not art. It’s a commercial PDA. I’m not qualifying that as a good or bad thing. I like weird quirky statues in town. I like the dawg statues in Athens, especially the ones painted wacky colors. AND REALLY, wouldn’t it be cool to see a green and gold dawg, representing the relationship UGA and the Stallion Squad have? They’re neighbors!

2-B) Let’s say, yes, a statue of a hand-painted football mascot bought by local businesses to raise money for agribusiness clubs and the collegiate FFA chapter is art and a fundraiser for worthwhile organizations. Yay!

But someone totally goofed it up. Boo!

Is the way people interact with public art a part of the art experience and where is the line between art and destruction?

Makes me think of one of my fave public art projects #TinyDoorsAtl. Artist Karen Anderson designs, installs and monitors about 15 mini doors around the Atlanta area. She says the doors are designed specifically for the community they inhabit. She’s even partnered with other artists to collab on doors.

One at Krog Street Tunnel features augmented reality and comes to life through an app. A lot of folks interact with her art. Mostly through cute photos, sometimes by dropping off mini presents, but sometimes her work gets destroyed. She spends 10-20 hours a week maintaining and improving the doors. All it takes is one person to crush it.

If we view everything as art, then destruction is art. (Ai Weiwei might agree.) So just paint over it and chalk it up to the public art experience. OR, does art, especially public art, demand/deserve respect? It’s for you, the public, to enjoy. You didn’t have to pay for it. Either enjoy it or ignore it. Going out of the way to destroy it seems rude and inconvenient.

But what about the message? In the case of our green and gold dawg, maybe there’s a larger message about respect for an institution that feels overlooked and/or undervalued. And a larger conversation about public art and our relationship with it. Okay, but...

3.) Are pranks art, tho?
Idk if anyone has ever seen a good prank video and thought, “Truly, a masterpiece.” (Suddenly I want to be a prank curator. AFV, but masterful.) There’s a good video about this topic. Two people thought it would be a hoot to put a pair of glasses on the floor of a modern art gallery.

They watched as people gathered around to examine it. The video, by The Art Assignment, compares their prank to a urinal that caused a maelstrom in the WORLD of ART. Like any good egotistical artist, the creator and his cohorts published a journal on the work along with analysis. (I just want to say that the photo of the urinal is more intriguing than the actual urinal but whatever.) In the journal, it reads that the piece “created a new thought for that object.” The host is basically like, “duh, all art does that.” AND IT DOOOOO.

4.) THE CONVERSATION. Or possible conversation. Or accidental conversation. Or the conversation no one bothered to think about because they were too mad. This conversation can’t take place from the perspective of the pranksters, that maybe it’s annoying to see people hail UGA and tolerate ABAC. We can’t interview the pranksters. (I hope it was a group of girls.) We can’t assess it from all possible angles and question the nature of public art, destruction, reconstruction.

We can’t. We just can’t. It’s just a fundraiser. It’s not that deep. But art lets us pretend.
It gives us the space and time to create a new thought for any object, even a green and gold dawg.
essay