An Appreciation: Fall Out Boy - Save Rock and Roll

April 25, 2013
When I knew that Fall Out Boy had a new CD I was experiencing a combination of feelings. The first was genuine excitement, the second was hesitation. Just the name Fall Out Boy brings me back to the middle school version of Shelby. God bless her. I remember my mom asking me, many times, why I wore so many skulls. During the time, I didn't notice the skulls, but looking back all I see are skulls and black. Maybe that explains my aversion to wearing black now?
Anyway, when thinking about Fall Out Boy I find myself reflecting on how my music tastes have transitioned. I was always into popular music, but I also went to the sixties and worked my way forward. I stalled out in middle school at the a faux-punk rock stage. Fall Out Boy, Paramore, Motion City Soundtrack, Cute is What We Aim For, Panic! At the Disco, The Used, My Chemical Romance etc. Oh, and if I ever found myself at a mall, Hot Topic was a place that MUST BE VISITED. Excuse me while I heave a big sigh. Now my musical tastes have taken another shift to alternative music, which seems to be a sort of catch-all for music genres. So, would Fall Out Boy be able to fit into my now refined *twirls mustache, puffs pipe* music taste? 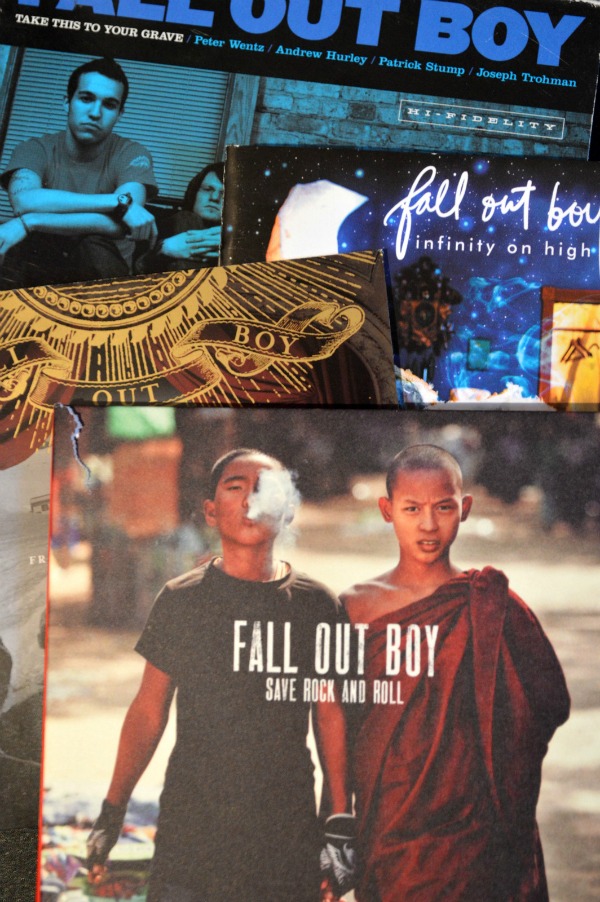 I listened to the CD first on Spotify. I needed to know if it was worthy of my purchase. SPOILER ALERT: it was. I love the CD. While I was going through my middle school phase, I feel like Fall Out Boy was too. Their sound, back then, had a squeaky clean "we're bad, grrrrrr" sound. Does that make sense? When I listen to those albums now, I realize how I don't experience any profound thoughts. The music gets me pumped, but doesn't move my mind. Save Rock and Roll has some reminiscence of that past Fall Out Boy sound, especially when I heard the opening to that first song. (I remember thinking, "Oh, no.") I kept listening for some maturity, and OH YAY, I found it.
For me, they have grown into this hybrid band, a weird combination of that previous faux-punk, genuine rock, indie rock, a little electronica, and some collaborations to round everything out. Their sound now feels genuine and interesting. It also reflects the sound of today. ~Oooo~ It has that get pumped rhythm with lyrics that don't really make sense, but also kind of do? I like this CD because I don't feel like their trying to be anything. They're just doing what they do, and some people won't like that. I'm not one of those people. Do I think it's the best CD since CDs ever existed? No, but it is good. I like listening to it and singing along, even if I'm not singing the right words.

What do you think of the CD? Is it worthy of your purchase?

Now here are some Fall Out Boy related links: