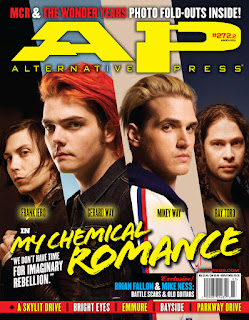 I've finally cracked open the March issue of Alternative Press, and it has My Chemical Romance on the cover. Now, I'm not a raging-lunatic fan, but I really love their attitudes (and music). They seem to have the hearts of true free-living, do-whatever-I-want rockers.
I envy that.
I suppose we have all had that daydream of just rockin out on stage while the crowd is roaring louder than a lion. And you always look amazing in this daydream, even if you are a bit sweaty from rocking so hard.

For once, I'd love to exude this attitude. People are so... trapped. Too busy thinking about how something is inappropriate or unnecessary. Why don't you just try being who you truly want to be? That isn't a concept taught in school. We go through the daily grind, and go to bed.
Who wants that?
Tomorrow I want to be a rocker.
And maybe the next day I want to be 90's kid.
The next day?
Who knows... I'll just do whatever I want.
And that's the rocker attitude.

"These guys who want to have the mohawk-- which, to me, is the new business casual-- and buy the shirts at the mall that say they're angry at something? They have to prove by how they loo that they are mad-cool and have cred? Go ahead, hold that torch. I'm not singing for you."
-Gerard Way