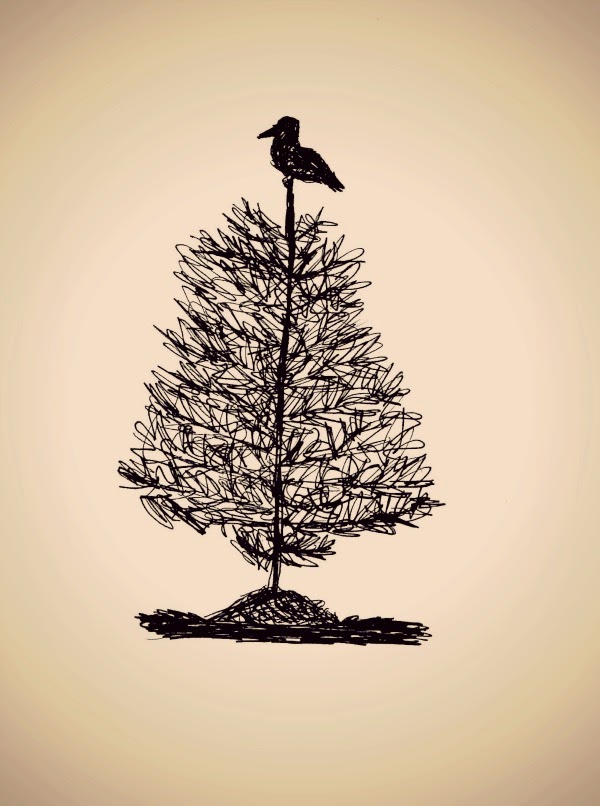 har·bin·ger
Noun
-A person or thing that announces or signals the approach of another.
-A forerunner of something.
Synonyms
herald - forerunner - precursor - messenger - portent

Do you believe in harbingers, bad omens, or signs? Well, either way, I would like to introduce to you my harbinger: Edgar Allen Crowe. I so lovingly bestowed that name upon just today. He is, obviously, a black crow. He's not every crow, he's a certain one. He's not the same one every time, but I know when he is for me. Crows are infamous for their cawing, but Edgar Allen Crowe doesn't caw. He quietly waits for me to notice him and then I know. Something not good is going to happen.
Consider the illustration above. This is the first time that I noticed Edgar Allen Crowe. I saw him on my way to high school, sophomore year. I remember watching him and finding him so strange. To me, he stood out like a bright yellow neon sign. I can't remember what happened that day. I remember it being a bad day. I have had several run-ins with him since then, some quit dramatic. On the Friday we were driving to my grandparents house, we hit a crow. We didn't even see its full body. I just saw a shiny black wing flapping against the top of the windshield, its iridescent wing flashing right at me. That day the hospital bed was set up in the living room.
Living in the south, it may sound ridiculous that crows would have any sort of special ability to represent prophetic happenings, especially considering the amount of crows that live in my region. I used to see them on the college campus all the time. They would caw and gawk and peck, and I knew none of them were for me. I became hyper-aware of their presence in my life while my Papa was the sickest. But while I was looking for them, they were not looking for me. I didn't see one crow the day my Papa passed or the few preceding days. At first I was angry at Edgar Allen Crowe, how could he abandon me at this darkest moment? That was when I realized death is not always a bad thing, or something to fear, or something to be associated with prophetic crows. So he left me then to show me that the end of suffering is good.
Maybe, just perhaps, you aren't fully convinced of Edgar Allen Crowe's ability. I'll leave you with one final example, the most recent incident. Today I backed-up into our driveway, nothing unusual. I noticed the hood. It was smoking. I stood there watching white ghosts file out of my favorite, and only, car. Then a friend came by. Edgar Allen Crowe swooped down above my car, flapping his wings, making no sound. He was so close to me, even closer to my car. He stayed there for what felt like moments and finally flew away. And wouldn't you know it, he brought a friend. Annabel-Crowe, perhaps?