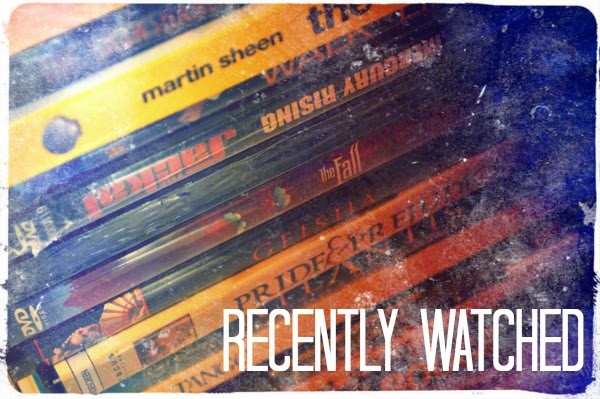 Life of Pi - Ang Lee
I've been super judgmental of books made into movies recently. Some books should just live on the page, you know? That being said, I don't think Life of Pi was a disappointment. It was hard to interpret to the movie as a work on its' own because I had already read the book. I saw the movie as more of an accompaniment to the book. (The book will always be better.)  I shouldn't compare the book and movie; they should be separate entities, so I'll try to skip over that. The visuals were amazing, obviously. Thank you, Claudio Miranda, for not only making the movies beautiful, but also for having an awesome name (and hair). The writing? Pretty good. Until the end. I felt like the end was rushed and unsatisfying. Like if you drop your ice cream cone before finishing it. It's hard to translate a book to screen, and I believe that this movie was a stunning representation of that book even if it wasn't perfect.

Hitchcock - Sacha Gervasi
Hitchcock had an eccentric vibe, as expected, but I think I was more surprised by the normalcy. A man and his wife. He has a demanding job, she tries to cope with it. It's a story I've heard in film and in life. The interesting part, the salt, comes from the people the characters are based off of. And that's all that is needed. It's a normal story changed dramatically by the characters. Those characters were played very well. There's no doubt about that. The makeup, costuming, and sets were all on point. So, what was it that kept this movie from being Oscar worthy? It doesn't push any bounds and it doesn't leave me wondering or questioning. Meaning, it didn't introduce any new ideas or observations of the world. It did leave me thinking about Hitchcock and his personal life, something I never considered before. There were elements in there that I think if they were the spotlight of the film it would have given me more of that awestruck, chill bump, feel. If it were to spotlight those certain instances it would have been a completely different movie. As it is, the movie is great film that allows a film-lover insight into the life of one the most eccentric, interesting men in the film industry. And for that, I am thankful.

Would I buy it?
Yes.

Okay, I'm a little bit late on this one, but I GOT YOU NOW. I've been wanting to watch it for a while and it finally came on and I was just like, life, you're gonna have to wait. It was worth it. Gosh, it made me fall in love with the French language all over again. I'm so upset that my college doesn't offer French. I kept staring at the screen totally enamored by the sets, costuming, writing, faces, all the things. It fulfilled my eccentric film needs. It was unpredictable, quirky, misleading, loving, inspiring. This definitely left me thinking of my own life. Is my own life strange enough? I need to take more photobooth pictures. Where are all these interesting people? This film was unique to itself and those are my favorite kind of films.

Would I buy it?
YES.

There was an edge of ridiculousness in this film, which I enjoyed. Certain set  pieces and costumes had me wondering why most dentists don't have as interesting modes of transportation. And ruffle shirts, where have all the ruffle shirts gone? A Tarantino film can never be predicted, so I didn't even try. I was just along for the ride. He was able to manipulate a horrible time in history into a weird satirical story that was both moving, heartbreaking, and, at times, hilarious. It was unexpected. Oh, and it was gory, but that's to be expected from Tarantino. If gore isn't something you can stomach, then I don't recommend any Tarantino films. Ever.

Would I buy it?
Maybe.

This film got a lot of praise. That always worries me. If a film gets built up a lot, I always feel like it will fall short of expectations. Unfortunately, this film was not an exception. I wonder if all the praise had to do more with the production company (The Weinstein Company) and less to do with the film itself. I'll put it this way, Silver Linings Playbook was a great indie film. If it was produced independently, I don't think it would have received as much attention, even with the big name actors. I mean, people still don't know about Winter's Bone. Anyway, I did enjoy this film. I like when a film can bring awareness to subjects currently being neglected, like mental health. It was interesting, a bit predictable, but kept moving. I do recommend watching it, but I think this was a one and done viewing for me. I might watch it again when it comes on the movie channels.

Would I buy it?
Probably not.

My brother and I watched this one together. It's a cheesy, predictable film and we had fun yelling out what we thought would happen. It was a little more depressing than it was inspiring, and I think writing was mostly to blame for that. Everything about this film was just okay. It won't stand out in my memory.

Joe Wright never let's me down. The sets, costumes, acting, cinematography were all compelling. I feel like my eyes drink in every scene Wright creates. I just soak it all up into my brain. The downfall of this film was continuity. My mom turned to me about twenty minutes in and asked, "What is this even about?" I had trouble answering. I never read the book and what I did know came from the imdb description. At times the sets were distracting me from the story. It just didn't translate well. If I had read the book before I think it would have been easier to comprehend, but I didn't. Is a film adaption of a novel supposed to be an accompaniment or a piece on its' own?  I always thought film adaptions should always be able to stand independently of the novel, but that doesn't always happen. I do recommend watching this film just for the visuals. It was inspiring in a visual sense.

Would I buy it?
Maybe

Wow, it has been a good while since I had last seen a 3D film. My only issue with 3D is the time it takes to focus. In a 2D film the shot is usually immediately focused, while in 3D it has a delay. WHICH IS INFURIATING. And the when people are running or their is a constant motion, oh no, it's all a blur. I can understand why so many people get headaches while watching a 3D film. Anyway, the costumes were blowing my mind. They looked so freaking cool. Same goes for the sets. Acting was topnotch. I think Abrams toned down the lens flares just a bit, but honestly, I don't even find them distracting. I was worried for Benedict Cumberbatch, but man, he delivered. Overall, I enjoyed the story line. There were some developments I was expecting and some I wasn't. It was a nice combination. I hope that this one is the worst of the films. Usually the second film is the worst in a series, and if that's the case now, good job. That's the best worst second film. I feel like they can take the story anywhere now. Which is EXCITING. Last note: I like how I can be connected through such a long history of storytelling to other people. I didn't watch the Star Trek television show, not because I didn't want to, it just wasn't readily available to me. So, for that reason, I'm glad that they've rebooted Star Trek. Now I have this connection to a lot of people. And I love to read about the references to the television show. There are so many things I don't know about the story, that I will get to learn. It's a pretty cool experience.

Would I buy it?
Yes.


Final note: It's been a while since I've seen most of these movies, so I don't think these reviews are perfect. Hopefully, the more I talk and read about movies the better I'll understand them. I am open to discussion about my opinions because they can always change. I like seeing how other people interpret a film, so tell me what you think.